New season. Same rules as Ive been trying to follow since I started. If Milan play at home the colors of inspiration is (mostly) black and red. If they play away its their adversary that deciedes colour, for instance Napoli at Neapel means a heavensblue inspired goodie. Also latest game ontop so the comments might be a little weird.

Spal – Milan 2-3 Even with a nice winning in the end Milan didnt reach Champions League. But still top 5 aint shame. The last cake of the season was a blueberry and lemoncurd coffecake.

Milan – Frosinone 2-0 Its so exciting! Who will get the Champions League spot? It all comes down to the very last game. Enormous happiness of winning. The cake was just simply awful and I dont wanna say I hate it but it was just a goddam mess. Its supposed to be striped and you know like.. whole…

Fiorentina – Milan 0-1 The Viola, or as I use to call them – the blueberryteam. Fiorentina has a perfect colour to achive with blueberries and what a great cake! So happy it was Hakan that scored. Was a long time ago!

Milan – Bologna 2-1 Was really nervous pre-game but it turned out great! The dragon visiting my cake felt neccessary since Game of Thrones very last season is beeing aired while writing this. Such amazing series.

Torino – Milan 2-0. Not really the result anyone was wishing for unless you are rooting for Torino of course. Milan still has a chance of advancing to Champions League.

Parma – Milan 1-1. A passionfruitpie topped with blueberries. A little sad that Milan didnt win. The pie got accompanied with some playthings. If you cant win try to find something postive at least.

Milan – Lazio 1-0. This is just amaaaaazing. Milan back to winning ways and after the hardwork Juve-cake last week, I had to do something ””simple”” a salty caramel nutpie. Winning and pie is a good combo. Keep up!!

Juventus – Milan 2-1. This was just an utter bullshit game.. But the cake. THE CAKE!!!! Nutella and chocolatemousse with a chocolate brownie with a strawberrymousse heart. It was pain putting together but I love it!

Milan – Udinese 1-1. Pom Pom Pom Pom! Piatek cant be stopped! I made a lingonberrycurd-pie with the red for Milan and the white meringue clouds for Udinese. A little bit of a stretch but a great pie is a great pie!

Sampdoria – Milan 1-0. Because of Sampdorias owner mr Ferrero I cant help myself falling into the Nutella-trap. Combined it with a swedish classic saffron-bread. Traditionally we swedes eat it around xmas but its soooo good. Also if you have ever used pinterest searching for nutella-star.. please dont laugh yourself to death over my failed atempt. Haha!!

Milan – Inter 2-3 It was a difficult game. Inter got an early goal and after that it was all about the hunt. I was very nervous! A collegue was sure Milan would win. For the game I tried something new, a english meringue roulade softly coloured blue and pink filled with cream and strawberries. Cant say I was happy with it but will probably make again.

Chievo Verona – Milan 1-2. Made this amaaaaaazing pineapplepie. That was to die for. Great colour and the taste was just tropical madness. Im also so impressed of Milan continuing this winning train. So proud of the guys!

Milan – Sassuolo 1-0. Finally another of my favorite teams. Sassuolo with their greenblack shirts. Which makes them ”the apple of my eye” always something apple- or pearinspired. This is another version of the cake i baked for the Empoli game the week earlier. The apples looks more like leaves.

Milan – Empoli 3-0. My team is in a great mood keep winning and Im just in a procrastination-mood not able making anything on time. Except this faaaaab apple cake. Blue caramellized apples and under all that nice soft vanillamascarpone is faaaaat layers of cinnamon and butterfried apples. One of the tastiest ive ever made?

Atalanta – Milan 1-3. Milans new player Piatek is craaaaazy. Scored one of those goals one can look 200 times at and like ”how the hell did he do that?” and Im so greatful he has arrived. About the cake: I wanted to redo a version of the Atalanta-cake I did some years ago but with more action sideways. A blueberry dream.

Roma – Milan 1-1. Roma was beaten BADLY by Fiorentina (1-7) so I thought it was gonna be a kinda smooth sailing to 3 points. Unfortunatly the Roma players most’ve gotten some fire under their butts cuz they were fighting hard. Anyway orange upsidedown cake. It was sweet, soft and yummie.

Milan – Napoli 0-0. So Milan faced Napoli twice and I had this idea of a cake that I had seen on facebook about a year earlier and now was the time. Lots of time spent to make the ice (rocket candy) and the fire (chocolate). Together with 2 nice fillings.

Genoa – Milan 0-2. More bars to the people! Ive started to become the most procrastinating person on the planet. In the end I had about 45 secs to actully plate and shot these bars before running like a crazyperson to work. Well they were good and Milan WON!

Milan – Spal 2-1 I made a lemoncurd and blueberryfilled spongecake but for some reason it didnt come out well and there is no photo of this. At some point maybe I will rebake it.

Milan – Fiorentina 0-1. Ive got a new camera and im working it out. Hence the crappy quality. I mean its more grainy then my eyes when the clock rings morningtime but the blueberry cheesecake was delish!

Bologna – Milan 0-0. Raspberry and blueberry bars with looooots of almonds. I must admit I was dissapointed Milan didnt win but cant get everything.

Milan – Parma 2-1. I was hoping Parma would carry their 3rd kit this game. Its a black shirt with a black cross framed by blue and yellow highlights. As a swede I felt connected to it and still wants it. Its like that awayshirt Sweden should’ve had for years. Anyway my cake is not sick with chickenpox, I just didnt sift the orangezest (slacky me) .. So the cake is kinda half-ass. Only the brown from Milan and orange for Parma..

Lazio – Milan 1-1. You should know by now that im obsessed with matcha-tea. So expect the Spirulina-madness to kick in now that Ive got my hands on that. After Lazio ”fans” earlier this year said that women weren’t welcome to the arena becaus of well… sexism.. I felt sad that Milan didn’t win.

Milan – Juventus 0-2. The idea on baking and presenting a cake like this had been floating around in my mind since the year 2010. One might think waiting 8 years to bake a cake is a little long but everything is a process. Haha. Back in 2010 I was searching for wedding cakes and found a version of this that forever etched itself into my heart. The game? Blaaah.

Udinese – Milan 0-1. This winning streak is aaaawesssoooom. More awesome are these amazing cookies. Dont you dare just scroll on, like you dont care! Took about forever to make them but it was worth it. I know they are .. well.. not perfect? But just like the win they were great.

Milan – Genoa 2-1. More lingonberries! Soft gingerbread cake with lingonberries. Have you noticed that there is lingonberries in all my cakes this season? Good for you. Now go wash your hands. And eyes. The game? Dont know. Was working BUT WE GODDAM WON!!!!!! And normally Genoa beats us!

Milan – Sampdoria 3-2 Godbless a win. I swear the neighbours were starting to use the heart-start machine through the wall after Milan for some minutes not only lost the 1-0 lead, Sampdoria got 1-2 before Higuin could even it out and Suso making a greeeeeeeeat goal at the end making Milan win. Anyway chocolatecookies with lingonberry icing.

Milan – Inter 0-1 Normally the derbygames require some badass out of the world pastry and this was of course not any different. Was hoping my cake would bring some magical luck but no.. At least it was insaaaaaanly good. Had good help from my collegues to devour it.

Sassuolo – Milan 1-4. Apples! Normally Sassuolo get baked goods with pears but them green apples claimed the victory this time. This was one of my first time baking brioche-buns, 7 eggs and like half a ton of butter for 26 buns but hell yeah it was worth it.

Milan – Atalanta 2-2, Empoli – Milan 1-1. I was occupied visiting Amsterdam and thankfully both Empoli and Atalanta are playing with blue shirts so I could smack them both together in this delish Nutella cheesecake with blueberries.

Cagliari – Milan 1-1. First time ever a drink in the blog and probably not the last. This magic drink isa matcha tea and some drops of lemon. If you follow me on Instagram you can see a movie of me mixing it. All drama, no music but deep and meaningful content. No shake and stir – just pouring.

Milan – Roma 2-1. I think my neighbours 5 houses away heard me yell when Cutrone scored in the 95’th minute with Milan’s winning goal. To this magnificent occasion I baked an orangechocolatefudge-flavored pie with seasalt and lingonberries.  Orangechocoalatefudge, is that even a word?

Napoli – Milan 3-2. So Napoli is the team that start this madness this season. Dont wanna say anything about the game since it was just .. BLAH!! Gingerbread muffins with lingonberries and blue matcha frosting. 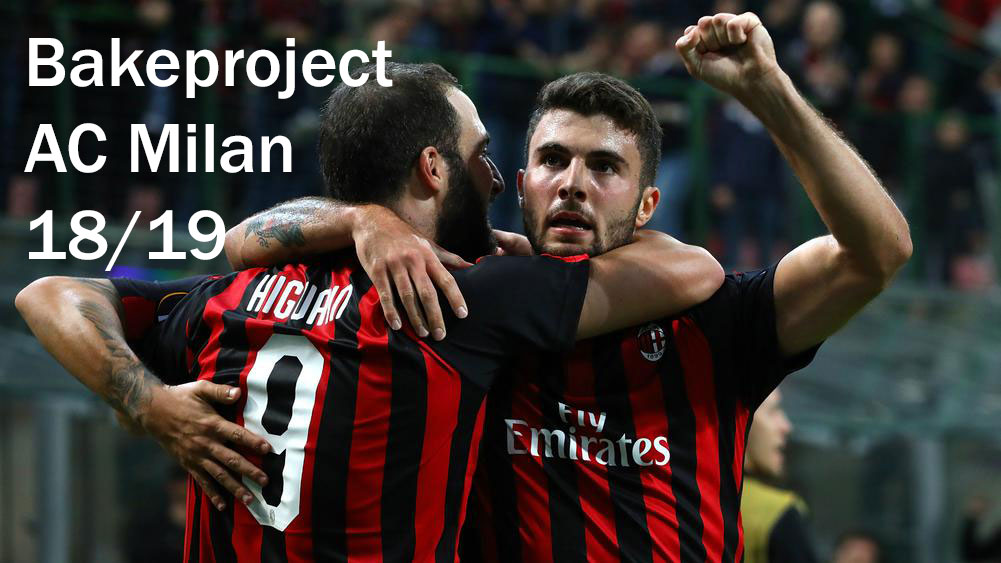 Baking something AC Milan inspired to (almost) every game. Most recent update click the image below. Or why not look on one of the earlier seasons. The project is presented in English.

If you wanna read anything else I’ve blogged and you dont understand swedish I suggest the fabulous (who am I kidding) ugly translatebox below. 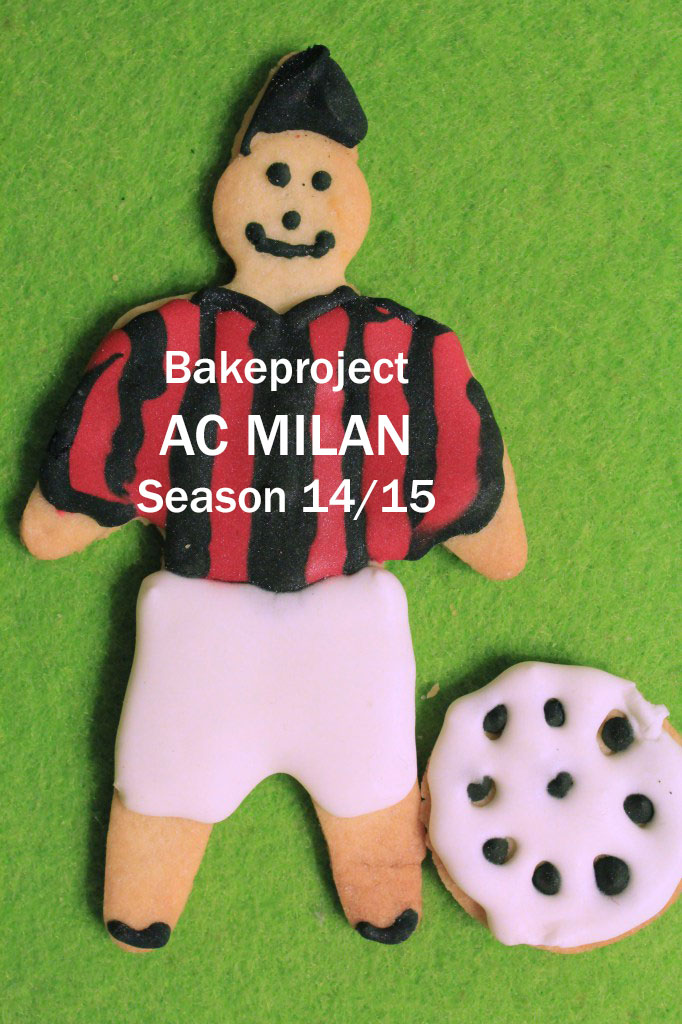